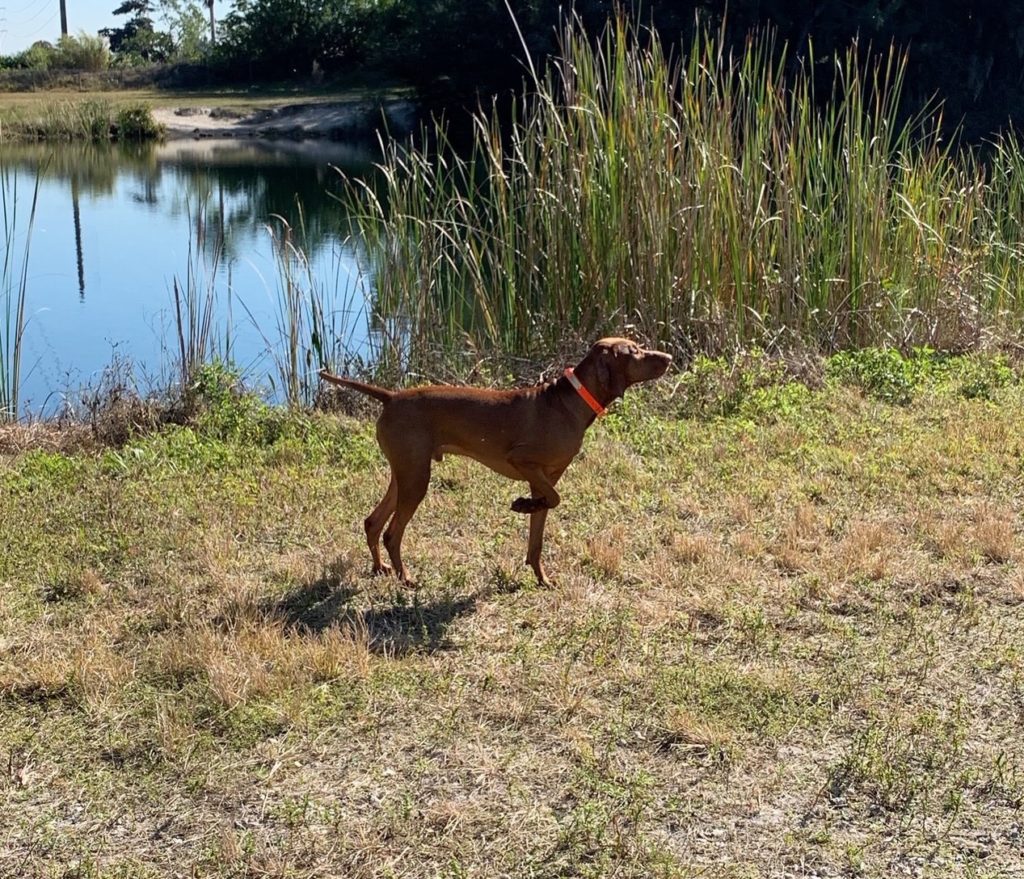 The Vizsla is a dog breed originating in Hungary which belongs under the FCI group 7 Pointer group.

History: Records of letters and writings of early land-owning Hungarian aristocracy dating from the middle ages show the high esteem in which they held their dogs of the Vizsla type. The Hungarian plains had an abundance of game, and hunters wanted a fast but close-working dog that could not only point and retrieve but trail mammals over thick ground cover. Warlords and barons jealously guarded these ‘yellow pointers’ and continued to develop their ability to hunt in the field, forest, and water. The breed was unquestionably established by the eighteenth century.

By the end of the nineteenth century, however, the breed had greatly declined in numbers but was fortunately revived through the discovery of about a dozen remaining dogs. During World War II the Vizsla was spread throughout the world as Hungarians fleeing Russian occupation took their pointing dogs to various other countries, including America, where their handsome appearance and exceptional hunting abilities were soon appreciated. In America, the Vizsla quickly gained admirers, and the breed is now regularly seen in the home. They are also sometimes called the Hungarian Vizsla or Hungarian Pointer.

Characteristics: The Vizsla is a natural hunter endowed with an excellent nose and has exceptional trainability. They are very intelligent, highly energetic, gentle-mannered, demonstrably affectionate and sensitive, as well as being fearless and possessed of a well-developed protective instinct. They are the smallest of the all-round pointer-retriever breed with a slight, muscular build that gives them speed, agility, and endurance. Their gait is light, graceful, smooth, and ground covering. Their short, dense golden rust-colored coat is a hallmark of the breed. Through the centuries the Vizsla has held a rare position among sporting dogs; household companion and the family dog.